Why are photocells important in electric gates?

The Home Of The Electric Gate Experts | Gate Auto UK › news › Why are photocells important in electric gates?

Enhancing your security gates with a gate automation kit gives you access to a whole new range of ways to open them quickly and effortlessly. These can include remote transmitters, access control systems, keypads or proximity readers. However, if they’re already in motion, in order to avoid the dangers of property damage or serious injury, they need something to tell them what’s in the way. This is the main function of safety photocells. Safety is obviously a hugely important factor for us here at Gate Auto, so every gate automation kit we stock comes with a pair of infra-red photocells, which form an integral part of the overall gate safety system. (Some of our customers specify an additional pair, which are optional depending on the layout of the driveway.) So, let’s take a quick look at how they keep you and your vehicle safe.

How do electric gate photocells work?

Each set of photocells comes in pairs, and work by sending an infrared beam from one to the other. You’ve probably seen enough security lasers in heist films to work out the basics – if the beam is broken, it sends a signal. In this case, that signal simply tells the gates to stop moving, pause, and then start to fully open again.

As we touched on above, each gate automation kit we stock comes with an essential pair of photocells. These essential safety features would be mounted on the gates’ exterior side, as illustrated by the diagram below. If a car arrives while the gates are in the act of closing, it breaks this infrared beam, so that the gates change direction and open to admit the vehicle. This drastically reduces the chances of the gates closing on the car, causing large amounts of damage and possibly even injury. 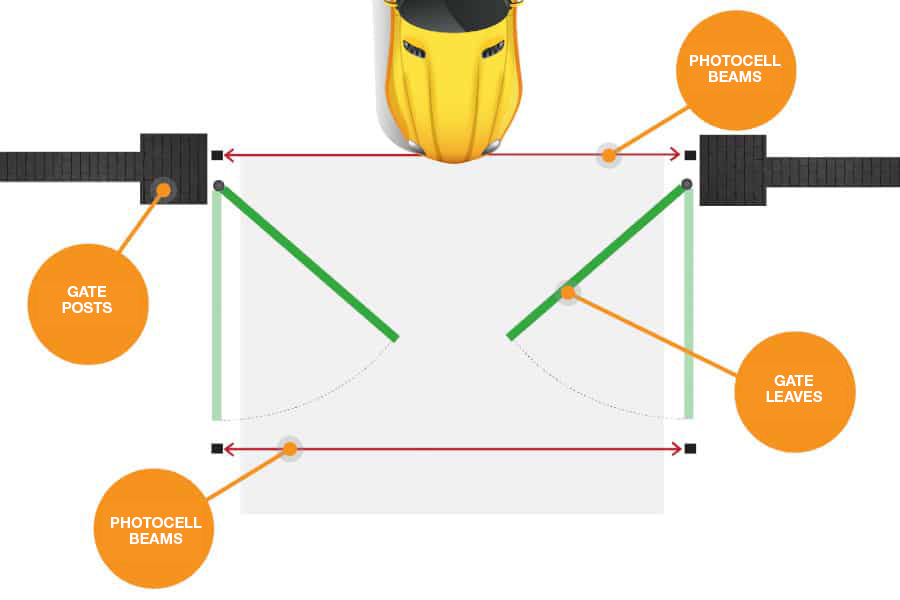 While most of our customers find just this first set of photocells to be sufficient, some prefer to have a second pair on the interior side of the gates for extra convenience. These require additional mounting points, which we can provide in the form of sturdy aluminium posts here at Gate Auto. When these are installed, the incoming vehicle will break the first beam before it starts moving through the gates, and then break the second beam as it moves through the gap. Once both infrared beams have been established and a suitable amount of time has passed, only then will the gates move back into position. 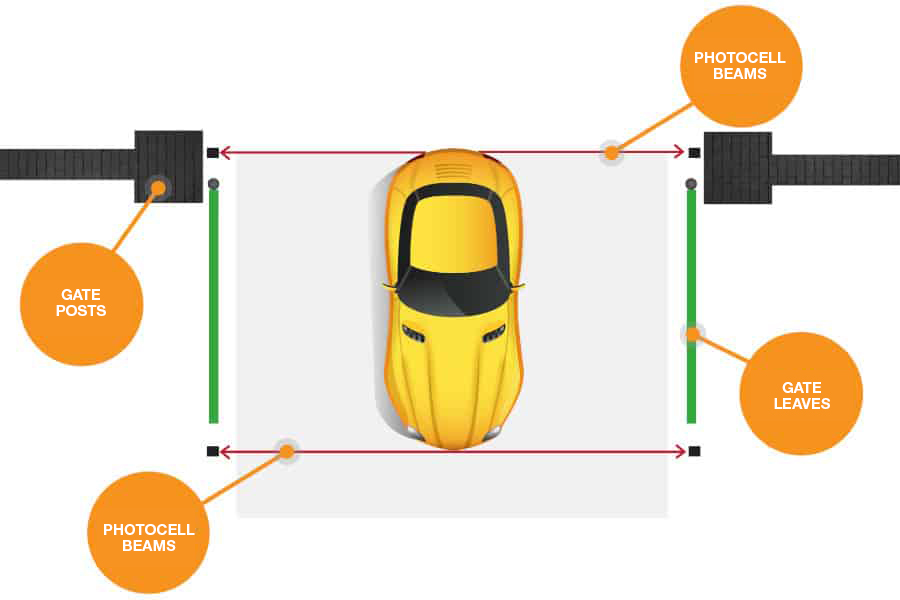 By the same token, it means that if the automated gates are in the act of closing when a vehicle approaches from the inside of the property, the innermost beam will be broken, and once again the gates will begin opening again to let the vehicle pass. 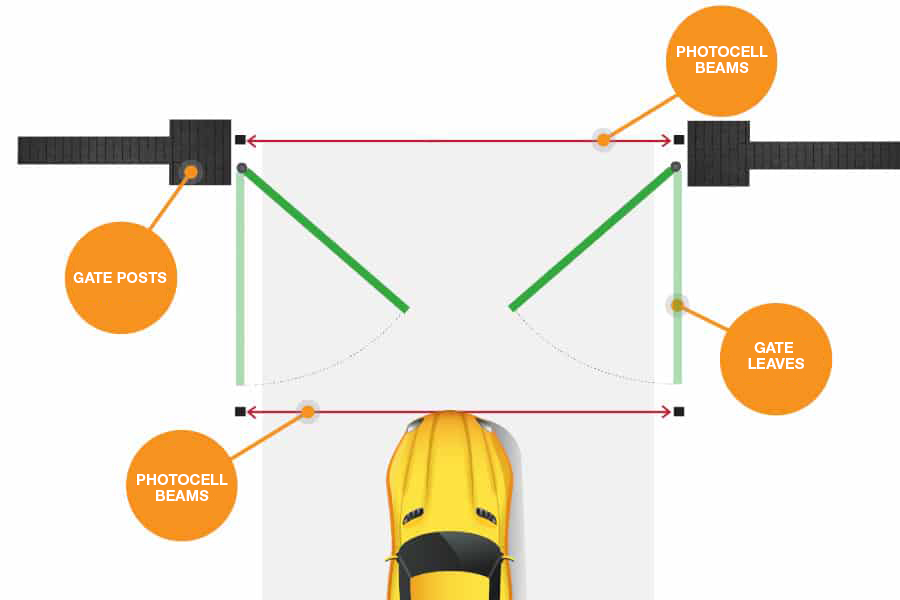 The photocells work on the same principle when applied to electric sliding gates, too, preventing the risk of causing any accidental damage to cars in the act of moving through them.

They’ll also work for people and certain animals, although obviously this is subject to how big the animals are! Even with the photocells in action, however, we don’t recommend that pedestrians attempt to enter and exit properties through the vehicle gates – not least because of the danger of vehicles colliding with them. In fact, that’s another question we sometimes find ourselves answering…

Can photocells be used to let people in and out?

No! These devices are only suitable for use as a safety mechanism on your gates, and not as a method of entry or exit. Whilst it’s often a thought that the concept of breaking the beam could be used to trigger the gates to open, the photocell pairs only work when the gate is in a commanded operation.

It’s not hard to see why; animals, pets and people could break the beam at will and cause the gates to open at inopportune or dangerous times. You might be able to easily open them when you walk the children to school, but so might a stray dog wandering around near your home at 2 am. Besides being noisy or annoying, it also completely undermines their security benefits if they can be simply opened by anyone or anything who approaches them.

That’s why the photocells in our gate automation kits are used purely for safety purposes. To create fast and button less exit options, a vehicle detection ground loop can be installed under your driveway. For anyone trying to get in an out of the property without a vehicle, you can always install separate pedestrian entrances, or push-to-exit buttons. These ensure that you can enter and exit your premises at will, but without compromising any of the safety or security aspects of your automated gates.

Here at Gate Auto, we have over 30 years in supplying and fitting high-quality gate automation, we provide a wide range of electric gate kits and garage door openers alongside an array of accessories to ensure you get the most out of your investment. Feel free to browse them right here on our site, or give us a call on 01282 677300!

Prev postNext post
Electric gates are designed to be resilient, so if you think yours may be damaged, it can be
Read More
Looking for the most affordable ways to add value to your home? Here at Gate Auto, we’ve been
Read More
We’re now well into winter, a season known for its longer and darker nights. Unfortunately, that provides more
Read More
Here at Gate Auto, we pride ourselves on supplying our clients with the very best electric gate kits
Read More
If you’re considering adding an electric gate to your property, this is probably one of the first questions
Read More
Security, convenience, value – there are a range of reasons why the installation of a Liftmaster garage door
Read More
Electric gates fulfil a variety of crucial roles for businesses – they can serve as a useful security
Read More
Whether you’re running a business that sees a lot of people constantly coming and going, or you’re simply
Read More
In short – yes, electric gates will add value to your home. But the question you’re probably asking
Read More
If you’ve already taken a quick look around our site, you may have seen us refer to electromechanical
Read More